From Heraldry of the World
Your site history : Newport Pagnell
Jump to navigation Jump to search 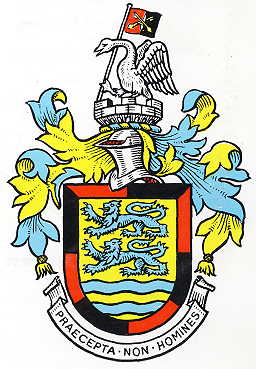 Arms : Or two Lions passant in pale in base as many Bars wavy Azure all within a Bordure gyronny of eight Gules and Sable.
Crest : On a Wreath of the Colours issuant from the Battlements of a Tower a Swan rising and supporting over the dexter shoulder a Staff proper flying therefrom a Banner per pale Gules and Sable charged with a Sword point upwards surmounted of two Keys in saltire all Gold.
Motto: 'PRAECEPTA NON HOMINES' - Principles, not men.

The blue lions are from the arms of the Paganel family, from whom the town derived its name, and their descendants, the Somerys. The two blue waves represent the rivers Ouse and Ouzel and the red and black of the border is from the arms of the County Council and were for centuries the liveries of the Earls and Dukes of Buckingham.

The battlements refer to the former stronghold of the Paganels and the swan, like that in the County arms, is derived from the badge of the Dukes of Buckingham, it also refers to the famous Swan Inn. The keys of St. Peter and sword of St. Paul refer to the dedication of the parish church.