From Heraldry of the World
Your site history : Newtownabbey
Jump to navigation Jump to search 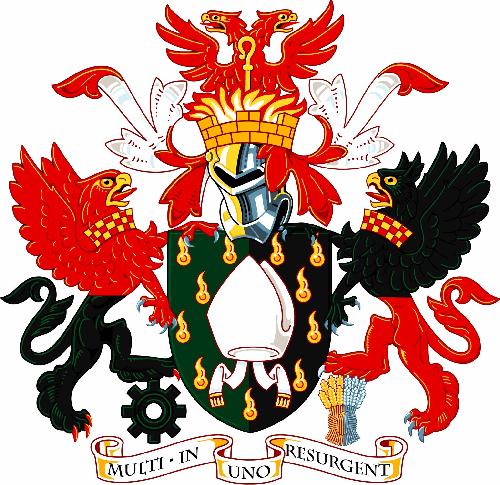 The arms were officially granted in 1976.

The abbot's mitre refers to the abbey which was founded here in the 13th Century giving the name to Whiteabbey.

The black and green represent agriculture and industry and the gold the wealth extracted from them. The phoenix has two heads as the creation of Newtownabbey was in two stages. The first head of the phoenix (facing dexter) refers to the original seven villages and the second head (facing sinister) to the additional villages. The red colour of the phoenix is taken from the armsof John de Courcey and is a reminder that he built the castle at Carrickfergus and installed Norman rule in the area.The Irish connection is seen in the red lion of the O'Neills.

The Motto "Multi in uno resurgent" means "Many Arise as One" 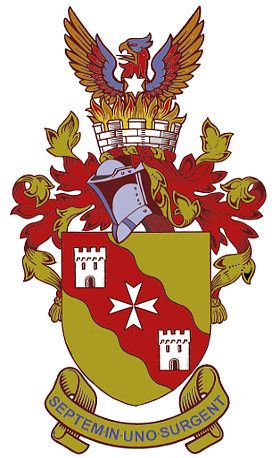 Arms : Or, on a bend wavy gules a Maltese cross between two towers argent.
Crest : Out of a mural crown argent, a phoenix proper charged on the breast with a mullet of six points also argent.
Motto: Septem in uno surgent

The trisection of the shield recalls the original three Parishes in the area: Shankill, Carnmoney and Templepatrick. The wavy bend also refers to the two rivers Ballylinny and Glas-na-Cradon passing through the town. The Maltese Cross is the emblem of the Knights of St John of Jerusalem, who were associated with the Abbey, and the two towers represent the two ancient strongholds of Whitehouse and Dunanney.

The motto 'Septem in uno surgent' — seven shall rise as one — recalls that seven villages went to make up Newtownabbey and the idea of re-appearance in another form is reinforced by the use of the phoenix in the crest.

The six-pointed star is a reference to the fact that six counties (Antrim, Armagh, Down, Fermanagh, Londonderry and Tyrone) form the United Kingdom province of Northern Ireland. This star appears on the shield of arms of the province.