From Heraldry of the World
Your site history : Niesky
Jump to navigation Jump to search 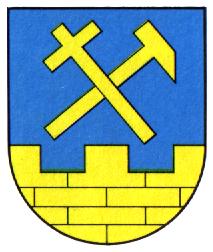 The arms were granted on March 10, 1932.
The city wall is taken from the arms of the Oberlausitz region (see also <a href=oos/ooshong/o-lausit|Oberlausitz]] and Bautzen), the region in which the town is situated.