From Heraldry of the World
Your site history : North Cotswold
Jump to navigation Jump to search 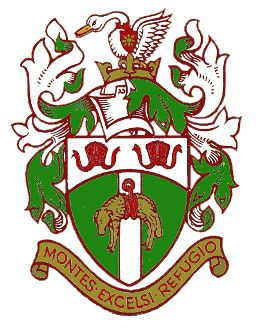 Arms : Vert, a pallet argent, over all a fleece Or ringed and banded gules; on a chief enarched of the second two mitres also gules.
Crest : Out of a coronet composed of four fleurs-de-lys set upon a rim Or, a swan rousant proper gorged with a ducal coronet, pendent therefrom an escutcheon gules charged with a sun gold.
Motto: 'Montes excelsi refugio'

The arms were officially granted on September 9, 1955.

The green field and enarched chief represented the curve of a hill and the white pallet no doubt represents the Roman Fosse Way, which runs south to north through the district. The fleece was a symbol of the traditional woollen industry of the area.

The gold fleurs-de-lys are likely to be from the arms of Sir Baptist Hicks, first Viscount Campden and the swan from the crest of the Greville or Grevel family. William Grevel of Chipping Campden was described as "flower of the wool merchants of England".

The motto chosen by the council, was adapted from Psalm 104.