From Heraldry of the World
Your site history : North East Fife
Jump to navigation Jump to search 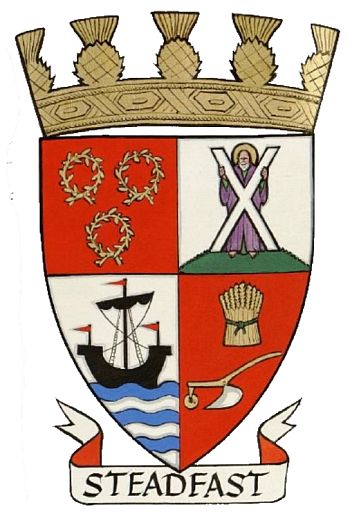 Quarterly: 1st, Gules, three crowns of myrtle Or; 2nd, Argent, on a mount in base the figure of Saint Andrew Proper bearing his cross in front of him Argent; 3rd, Argent, on a base undy Azure and of the Last a lymphad, sails furled, Sable, flagged Gules; 4th Gules, in chief a garb Or, banded Vert, and in base a plough also Or, share Argent.

Above the Shield is placed a coronet appropriate to a statutory District, videlicet:- a circlet richly chased, from which are issuant eight thistle-heads (three and two halves visible) Or; and in an Escrol under the Shield this Motto "Steadfast".

The arms are quartered and show in the first quarter three crowns of myrtle taken from the arms of Cupar. The second quarter shows the arms of St. Andrew; the third a gally for the importance of sailing and maritime industries in the district; and in the fourth a garb and plough for agriculture.