From Heraldry of the World
Your site history : North Lincolnshire
Jump to navigation Jump to search 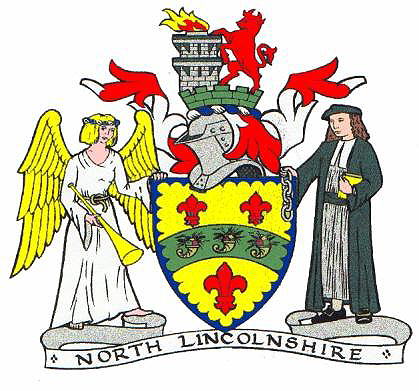 The shield comprises the fleur-de-lis - in recognition of the area as part of historic Lincolnshire. Within the centre of the shield are the cornucopias on a green background - an unambiguous reminder of the area's fertility and vitality. North Lincolnshire's wharves and waterways are represented by a wavy blue border - the border which also creates the effect of an island to denote the Isle of Axholme.

To represent industry and commerce and to reflect the modern age of the coat of arms, two important economic landmarks are included - the Humber Bridge and Humberside International Airport. The bridge is symbolised by an enarched bar - the curve centre of the shield; and the airport is shown by the wings of the angel.The angel on the right was chosen for its significance in the birth of the new authority, with the restored Angel Hotel in Brigg, the first administrative HQ based in a market town with a long association with local government. The rope around the angel's waist represents the town of Barton and its history of rope-making. To the left, John Wesley, founder of Methodism, with his roots in Epworth, was chosen to demonstrate the importance the new authority attaches to the Isle of Axholme. In Wesley's right hand are five links, each representing one of the five villages - Ashby, Brumby, Crosby, Frodingham and Scunthorpe - which comprise the industrial garden town of Scunthorpe.

Above the shield, is found the mural crown which provides the base on which the blast furnace and the Lincolnshire Red Shorthorn Bull are placed, adopted from the Scunthorpe and Glanford coat of arms, respectively.