From Heraldry of the World
Your site history : North Walsham
Jump to navigation Jump to search 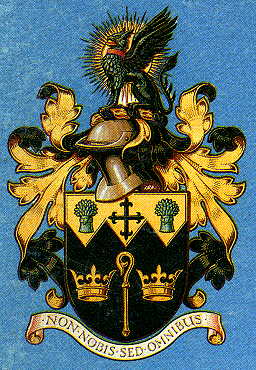 Arms : Sable a Crozier between two ancient Crowns Or on a Chief dancetty of the last a Cross flory of the first between two Garbs Vert.
Crest : On a Wreath of the Colours in front of a Sun in splendour Or a Griffin sejant Sable collared Gules.
Motto: 'NON NOBIS SED OMNIBUS'

The arms were officially granted on December 19, 1949.

The crozier and crowns are those of St. Benet-at-Hulme. The dancetty chief is from the arms of the Paston family and the cross flory from the arms of Lord Nelson. The green sheaves on gold indicate agriculture and "early growth".

The Griffin is also from the heraldry of the Paston family, and the radiant sun refers to the healthy nature of the district.