From Heraldry of the World
(Redirected from North Wolds) 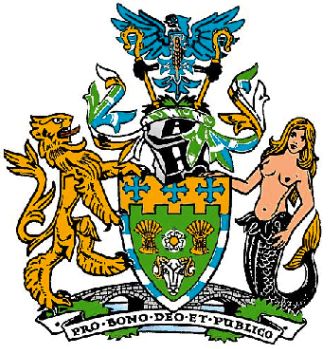 Arms : Vert in chief a Rose Argent barbed and seeded [proper] between two Garbs Or in base a Ram's Head caboshed Argent armed Or within a Bordure gobony wavy Azure and Argent overall on a Chief embattled Gold three Crosses flory Azure.
Crest : On a Wreath Argent and Vert a a Mount cleft pilewise Vert thereon two Crosiers also pile wise heads outward Or grasped in the talons Sable of an Eagle displayed Azure beaked Sable and charged on the breast with an Ear of Barley proper; Mantled Vert and Azure doubled Argent.
Supporters : On a Compartment representing the Banks of the River Derwent and thereover Stamford Bridge proper to the dexter a Lion Or and to the sinister a Mermaid proper crined and with tail fins Gold.
Motto: 'PRO BONO DEO ET PUBLICO' - For the good of God and the public

The arms were officially granted on February 9, 1976.

The blue and white border represents the sea and the three crosses symbolise the numerous Saxon and Norman churches in the Borough. The sheaves and white rose, like those in the arms of the Pocklington RDC, refer to agriculture and Yorkshire. The ram's head, like that in the arms of the Driffield UDC, refers to the area as a great agricultural centre. The embattled chief is like that of the Borough of Bridlington.

The two croziers stand for the part religion has played in the area. The eagle is like that in the arms of the former East Riding CC. The ear of barley is a token of the product so largely grown in North Wolds as well as the malting mill on the outskirts of Bridlington. The mound upon which the croziers rest represents the Wolds in general and by its 'V' shaped indentation at the summit, archaeological excavations which have been carried out in the past 100 years.

Literature : Image send to me by mail.