From Heraldry of the World
Your site history : Northam (England)
Jump to navigation Jump to search 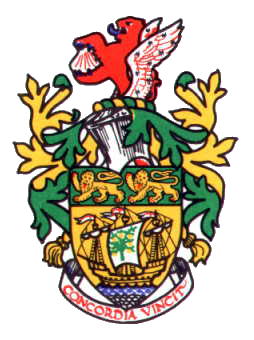 Arms : Or on a Base of waves of the Sea and Pebbles an ancient three masted Ship proper the mainsail set Argent charged with an Apple Tree couped above the root Vert fructed of seven Apples Or pennons fying Silver each charged with a Cross Gules on a Chief Vert two Lions passant guardant Gold.
Crest : On a Wreath Or and Vert a demi Lion rampant Gules holding in the paws an Escallop Argent the Lion between two Wings addorsed Ermine.
Motto: 'CONCORDIA VINCIT'

The arms were officially granted on March 5, 1963.

The shield represents the whole district in its three parts - Northam, Appledore and Westward Ho!. The 'chief' represents Northam, with its green background typifying the wide open spaces of the village and especially the Royal North Devon Golf Club, identified by the golden royal lions referring to the patronage of King George VI. The two lions are also a reference to the granting of the Manor of Northam by William I to the Abbey of St. Stephen at Caen in Normandy, whose arms included the two lions.

The ship upon a golden background, resembles those of Elizabethan times, and recalls the ships that sailed from Bideford Bay to fight the Armada. Many of these were built and and manned at Appledore, where shipbuilding is still carried on and where, as in the days of the Armada, vessels of the Royal Navy were prepared for assault on the enemy.

The gold and green of the wreath are symbolic of the landward parts with their grass and gorse, and of the golden sands. The red lion with a scallop shell comes from the arms of the Leighs, and the ermine wings from the crest of the Burroughs, two families connected with the area's history. In secondary symbolism, the red lion from the Devon arms is shown offering the seaside amenities represented by the scallop shell and flanked by raised wings alluding to the healthy breezes.

The arms are continued by the town council