From Heraldry of the World
Your site history : Northampton
Jump to navigation Jump to search 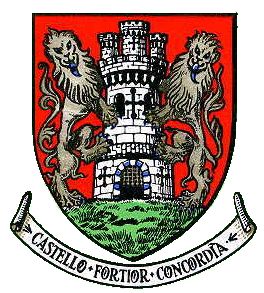 Arms : Gules on a Mount Vert a Tower triple-towered Argent the portcullis raised Or supported by two Lions rampant guardant of the last.
Motto: 'CASTELLO FORTIOR CONCORDIA' - Peace is stronger than a fortress

The arms of Northampton were recorded in 1617.

As is frequently seen in early English civic arms - themselves derived from ancient seals - Royal and local emblems are combined. Two English lions stand on either side of the castle keep. This represents the town's castle built about AD 1100.