From Heraldry of the World
Your site history : Northleach
Jump to navigation Jump to search 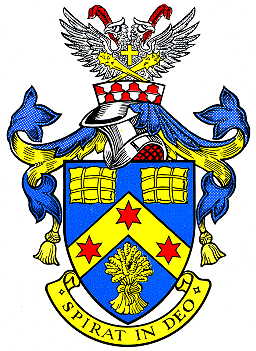 Arms :Azure on a Chevron between in chief two Woolpacks and in base a Garb Or three Mullets of six points Gules.
Crest :Out of a Circlet vairy Argent and Gules and in front of a demi double-headed Eagle displayed Sable charged on the breast with a Long Cross Or in each beak an Ostrich Feather also Gules two Spiked Clubs in saltire Gold; Mantled Azure doubled Or.
Motto: 'SPIRAT IN DEO' - Put your hope in God

The woolpacks symbolize Northleach when it was famous as a wool town in the fifteenth century. The chevron with three stars represents Westwoods Grammar School, Northleach, an ancient foundation which was originally housed in the actual Council Offices. The sheaf of corn symbolizes the present day agricultural industry.

The crest incorporates elements from the arms of four well known families who have a long association with the district - Bathurst, Beale-Browne, St. Aldwyn and Sherborne. Also embodied in the crest is the church, which is symbolised by a gold passion cross charged on the breast of the eagle.