From Heraldry of the World
Your site history : Northumberland County Council
Jump to navigation Jump to search 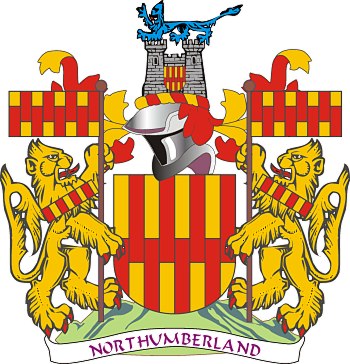 Before this the council used the attributed arms of the Kingdom of Bernicia - "paly of eight Or and gules". In the official grant this has been altered to represent Hadrian's Wall and the English / Scottish border.


The crest is based on the old badge of the county Sherrifs. The blue lion with extended tail comes from the arms of the Percy family, Earls and Dukes of Northumberland.


The supporters are gold lions from the attributed arms of King Oswald of Northumbria. The arms are repeated in the crest, in the banners held by the supporters and in the colours of the collars.