From Heraldry of the World
Your site history : Northwich
Jump to navigation Jump to search 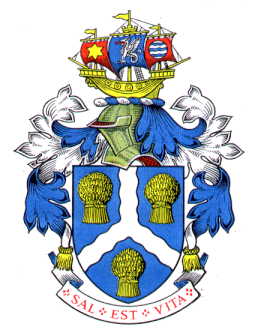 Arms : Azure a Pall wavy reversed Argent between three Garbs Or.
Crest : On a Wreath of the Colours an ancient three-masted Ship pennons flying Or the mainsail Azure charged with a Wyvern sejant Argent the foresail Gules charged with a Mullet of six points Gold and the mizzen sail also Gules charged with a Fountain.
Motto: 'SAL EST VITA' - Salt is life.

The arms were officially granted on September 10, 1962.

The three gold wheatsheaves on blue, are those of the Earldom of Chester, and relate to the Cheshire County and manorial history of the town. Since they also occur in the arms of the Vernon and Leftwich families. The reversed Y-shaped figure with wavy edges represents the confluence of the Rivers Weaver and Dane, and define the situation of the town irrespective of the future changes in its boundaries or status.

Blue and white are the heraldic colours for water and mineral springs, indicative of Northwich's association with the salt industry. They also appear in the colours of the Stanleys (Earls of Derby), and the Venables, holders in chief of Northwich and Witton. The golden ship depicts the importance of the Weaver Navigation in the industrial history of Northwich. The mainsail bears the wyvern of the Venables family, and the other sails a gold star on red, from the Brunner arms, and an heraldic fountain from the Mond crest. This symbol is believed to have been the origin of the ICI Mark. The star and fountain display the connection of Brunner, Mond and Company, the predecessors of ICI, with industrial Northwich. Wyvern, once spelt "wivre" and pronounced "weever", is heraldic wordplay on the river-name.

The motto is a fitting allusion to Northwich as a principal salt and brineproducing town from Roman times.