From Heraldry of the World
Your site history : Cheshire West and Chester > Northwich RDC
Jump to navigation Jump to search 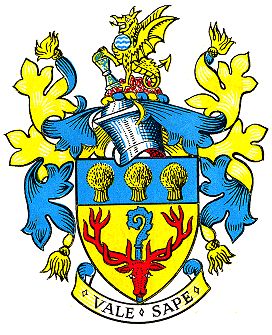 Arms : Or, in front of an abbot's crozier erect issuant from the base azure, a stag's head caboshed gules; on a chief of the second three garbs gold.
Crest: On a wreath of the colours, Upon a red sandstone rock proper, a wyvem sejant Or charged on the shoulder with a fountain and resting the dexter claw on a covered salt argent, garnished gold.
Motto: Vale sape.

The arms were officially granted on December 11, 1953.

The blue crozier represents Vale Royal Abbey and the deer's head the Delamere Forest, it is also a reminder of the family of Done, Hereditary Foresters of Delamere. The three gold sheaves link the area to the earldom and County Palatine of Chester, also suggest the Rural District, and occur in the arms of many local families - Grosvenor, Cholmondeley and Vernon.

At the base of the crest is the local red sandstone which lies above the salt beds. The wyvern, which occurs also in the Egerton arms, is a play on the name of the important River Weaver, as the monster's name was formerly spelt "wivre", as was that of the river. The heraldic fountain strengthens the allusion to the river and also symbolises the local meres. The chemical industry is also indicated, for this device, occurring in the Mond family arms, is said to form the basis of the well-known I.C.I. badge. The wyvern rests a claw on one of the salt vessels from the arms of the Salters' Company, and this completes the reference to the local industries.

The motto is partly a play on the name of Vale Royal, and partly a further reference to the salt industry, for the Salters' motto is "Sal sapit omnia". It also alludes to the motto of the Brunner family "Bibe si sapis".

Literature : Image and information from www.civicheraldry.co.uk