From Heraldry of the World
Your site history : Nottingham
Jump to navigation Jump to search 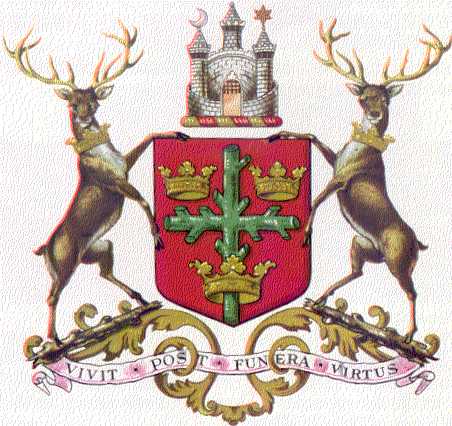 Arms: Gules issuant from the base a ragged Cross couped proper between two Ducal Coronets in chief Or the lower limb of the Cross enfiled with a like Coronet.
Crest: On a Wreath of the Colours a Castle walled triple-towered and capped proper the dexter tower surmounted of a Crescent Argent and the sinister tower by an Estoile Or.
Supporters: On either side standing on a Staff raguly erased a Royal Stag guardant proper ducally gorged Or.
Motto: 'VIVIT POST FUNERA VIRTUS'

The arms were officially recognised by the College of Arms in 1614 but it is not known how long they had been in use. The crest was granted on June 10, 1898. On June 11, 1898 two forester supporters (Robin Hood) were granted, which were replaced on November 3, 1908 by the present two stags.

The arms depict a rough, wooden cross in green rising out of the base of a red shield between two open crowns of gold with a similar crown around the lower limb of the cross.

The crest takes the form of a walled castle with three towers, all in their natural colours, standing upon a wreath of red and gold. The right hand tower bears a silver crescent and the left hand one a golden star. In heraldry, right and left are determined by the position of the bearer of the arms, not by the onlooker.Granted as a crest in 1898, it incorporates the design of the present City of Nottingham Seal, which has been in use since the 15th century, but in the seal the crescent moon and star are shown above the towers,not on them, see image below.

The supporters of the shield are two royal stags, looking outwards and standing on rough broken branches. Each stag bears an open golden crown around its neck. Befor ethe arms showed two foresters as supporters, see also the images below.

Literature : Image and information provided by the Nottingham Council (www.nottinghamcity.gov.uk)