From Heraldry of the World
Your site history : Nuneaton and Bedworth
Jump to navigation Jump to search 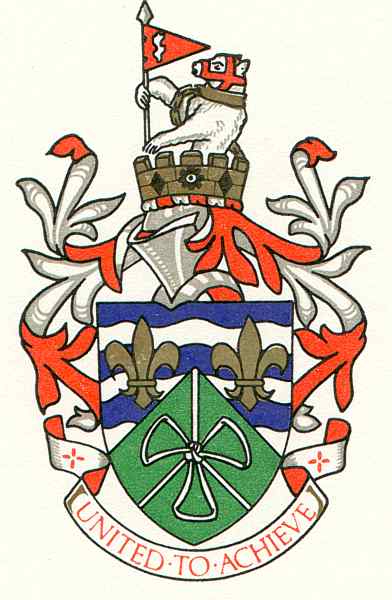 Arms : r chevron barry wavy of six Azure and Argent and Vert in chief two Fleurs-de-Lis Or and in base three Ribands in pall reversed tied with a triple Bow Argent.
Crest : On a Wreath of the Colours issuant from a Mural Crown Or charge with a Cog-wheel between two Lozenges Sable a demi Bear Argent muzzled Gules collared and chained Or supporting a Staff flying therefrom a Pennon Gules charged with a a ragged Staff Argent.
Motto: 'UNITED TO ACHIEVE'

The Arms are derived mainly from those of the constituent authorities.
The upper half of the shield is composed of the blue and white waves from the Nuneaton shield illustrative of the original name of the Town "Eaton" ("Town by the running water"). On these lie the two gold fleur-de-lis, emblems of the Blessed Virgin Mary to whom the ancient Nuneaton Priory or Nunnery which was attached to the famous Order of Fontrevrault was dedicated.

The lower half contains the three white ribbons on green from the Bedworth Arms, in which they represent the union of the three parishes and central road pattern in terms of a distinctive local industry.

The crest shows a gold mural crown like those of Nuneaton and Bedworth and is charged with the two black diamonds from Nuneaton and Bedworth Arms (for coal mining) and a black cogwheel (for engineering). Out of the crown rises the bear, again from the arms of Warwickshire, holding a pennon displaying the ragged staff.

The motto, "United to Achieve," combines the themes of those of Nuneaton ("Prêt d'accomplir" "Ready to Achieve") and of Bedworth ("United to Serve").