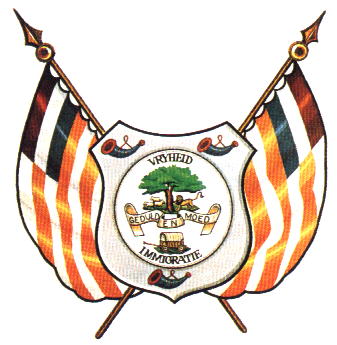 The Oranje Vrijstaat was a republic proclaimed on 23 February 1854. It succeeded the British Orange River Sovereignty, which was created in 1848 when Sir Harry Smith annexed the territory for the British. The territory had been colonised since the 1830s by the Boers moving from the Cape Colony. The Boers at that time did not form a separate republic as in the area North of the Vaal river.

The Orange River Sovereignty did not have its own arms.


The new republic had no flag, arms or seal to put on official documents, so the matter to develop national symbols was rather urgent. On 15 May 1854 the secretary of the Oranje Vrijstaat wrote to the Dutch consul whether the Dutch King William III would be willing to grant the new republic arms. The Dutch King did grant new arms, which arrived in Bloemfontein on 12 January 1856. The arms showed a silver field with an orange wavy bar with three bugle horns. The bar symbolised the Orange river, the three bugles are the arms of the Princes of Orange. The Dutch Royal House is of the Oranje-Nassau dynasty. On each side of the arms a flag was draped. The flag was striped with 7 stripes, silver and orange, with in the corner the Dutch red-white-blue flag.

In the meanwhile the government had ordered a seal to be made in Cape Town. The matrices of the new seal arrived at the same day in Bloemfontein. This resulted in a dilemma and the Volksraad (parliament) decided to combine the two. So instead of the wavy bar, the new seal was placed between the bugles. This created a rather unheraldic coat of arms, as the seal showed a tree with sheltering under it three sheep and a lion. Under the tree stood a typical Boer wagon. Four words indicated the significance of each symbol, and were placed above the tree, between tree and wagon and below the wagon. The words were Vryheid (liberty), Geduld (patience), Moed (courage) and Immigratie (immigration).

The species of tree, unfortunately, was not defined. In 1865 the first oranges appear on the tree, on stamps for the republic. In 1891 the arms on the great seal also showed oranges. The oranges were obviously a canting symbol, but caused much debate later for the provincial arms.

In 1902 the British annexed the republic, which became the Orange River Colony.