From Heraldry of the World
Your site history : Otley
Jump to navigation Jump to search 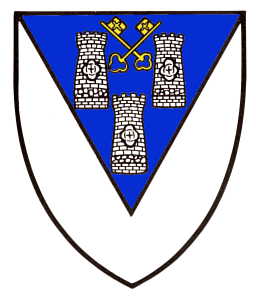 Argent on a Pile Azure three Towers two and one of the first in the middle chief point two Keys in saltire wards upwards and inwards Or.

The arms were officially granted on December 14, 1951.

The arms are based on those granted to the Otley Association in 1798. The three towers perhaps refer to the three manors of Otley, Cawood and Wistow, which were elevated into a "Liberty" by King Athelstan in the year 937.