Parish of All Saints, Peterborough

From Heraldry of the World
Your site history : Parish of All Saints, Peterborough
Jump to navigation Jump to search

PARISH OF ALL SAINTS (Peterborough, Quebec) 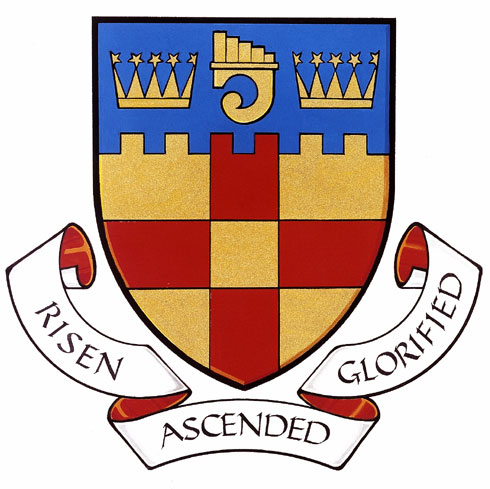 Or a cross quarter pierced Gules, on a chief embattled Azure a clarion between two celestial crowns Or; Motto: RISEN • ASCENDED • GLORIFIED

The prominence of the cross indicates the Christian mission of the church, and its red colour evokes St. George and thus Anglicanism and the arms of the Anglican Church of Canada.
The distinctive centre of the cross conveys the idea of the parish’s openness.

The section at the top is blue as a reference to the decorative scheme in the recent renovations to the church building and reminds all of the church’s geographical setting in the Kawartha Lakes. The crenellated line denotes its tower, completed in 1996.

The clarion, which may originally have represented a portable organ or pan-pipes, signifies the magnificent organ of the church as well as the central role music has played in worship at All Saints’.

The crowns of stars, known as celestial crowns, are traditional Christian symbols for saints, and thus refer to the name All Saints’.

The motto RISEN • ASCENDED • GLORIFIED are the final three words of the hymn “Lord, enthroned in heavenly splendour” by Canon G.H. Bourne with music by Dr. Healey Willan.