From Heraldry of the World
Your site history : Peterborough (Ontario)
Jump to navigation Jump to search 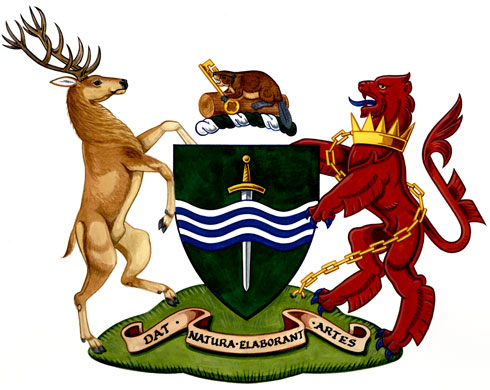 Arms : Vert a sword point downwards Argent pommel and hilt Or surmounted by a fess barry wavy of six Argent and Azure.
Crest: Upon a log of wood fesswise a beaver proper grasping with the sinister paw a key ward upwards Or and to the sinister.
Supporters: On a grassy mound Vert dexter a stag proper and sinister a lion Gules gorged with an Eastern crown and chain reflexed over the back Or.
Motto: DAT NATURA ELABORANT ARTES

The arms were officially granted on May 9, 1950, to commemorate the centennial year of Peterborough's establishment as a separate municipality. they were confirmed in the Canadian register on June 17, 1999.

The green shield represents the 'champs' (French for 'field') in the word "Champlain", a reference to the first explorer's trip through this district in 1615. The green can also refer to the Emerald Isle, from which the first Irish immigrants were brought under the direction of the Hon. Peter Robinson in 1825. It was due to this immigration that Peterborough became a place, and secured its name. It also refers to our fields and forests in this district.
The sword recalls the veteran soldiers and officers of the British army who fought in the Napoleonic Wars, and in the War of 1812 in North America. These men received grants of land in Otonabee and other townships in the district in 1818 onwards, and were in the area when the Irish Settlers arrived.

The wavy bar represents the Otonabee River and the many lakes and rivers from which Peterborough draws much sustenance and revenue, and because of which access was possible to this townsite from the Lake Ontario Shore.

The crest shows on a log of wood a Canadian beaver, grasping in its left forepaw a gold key. This is to represent the key of St. Peter, a tribute to the Roman Catholic third of the city's population, to the religion of the Irish immigrants, it is a reference to 'Peter' in the city's name, the key of St. Peter.

The left supporter is a Canadian stag, in natural colour. The right supporter is a red lion with its neck encircled by a crown, and a chain draped over its back. The lion as supporter is taken from the Duke of Wellington's family crest. It was under him that many officers and men, first settlers in this district, served. It was originally intended to use an emblem from Nelson's crest for the other side, but this was found to be a sailor, and not suitable for Peterborough.

The motto is unchanged from the motto which the city has had for a long time. "Nature Provides, Industry Develops", but it is translated into interpretative Latin: "Dat Natura, Elaborant Artes", which means, a little more broadly, that Nature gives bountifully and the arts and crafts and energy of the people develop and elaborate nature's gift. It refers to Peterborough's abundant natural resources, and her industries.