From Heraldry of the World
Your site history : Philippeville
Jump to navigation Jump to search 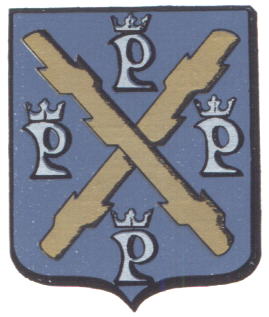 The arms were probably granted in 1554 wen the city was founded by Emperor Charles V. He named the new city after his son, the later King Philip II of Spain. The arms thus show four crowned letters P and the cross of Burgundy, as an indication to the history of the dynasty.