From Heraldry of the World
Your site history : Radcliffe
Jump to navigation Jump to search 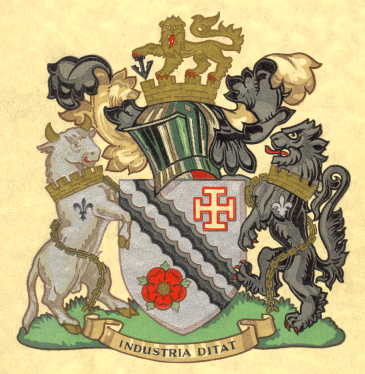 Arms : Argent two Bendlets engrailed Sable between a Cross potent voided of the field and a Rose of the third barbed Vert seeded Or.
Crest : Upon a Mural Crown a Lion passant guardant Or the dexter forepaw resting on a Pheon Sable.
Supporters : On the dexter side a Bull Argent armed and unguled gorged with a Mural Crown attached thereto a Chain reflexed over the back Or and charged on the shoulder with a Fleur-de-Lys Sable and on the sinister side a Lion Sable gorged and chained as the dexter and charged on the shoulder with a Fleur-de-Lys Argent.
Motto: 'INDUSTRIA DIDAT' - Industry enriches

The arms were officially granted on September 10, 1935.

The black bendlets are from the arms of the Radcliffe family, the cross from those of Pilkington, and the red rose is that of the County of Lancashire.

The supporters are those of the Radcliffe family, differenced by the addition of mural crowns, symbol of civic government.