From Heraldry of the World
Your site history : Ramsgate
Jump to navigation Jump to search 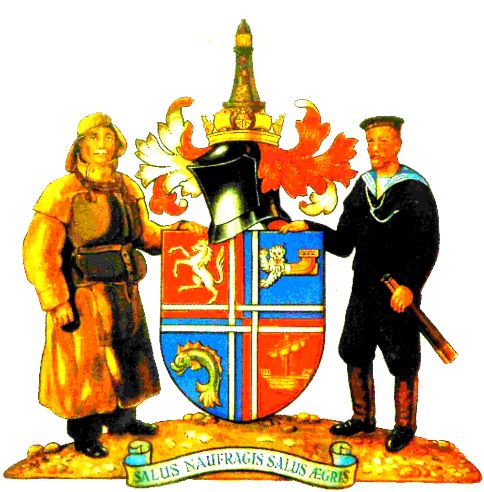 Arms : Quarterly gules and azure, a cross parted and fretty argent between a horse rampant of the last in the first quarter, a demi lion passant guardant of the third conjoined to the hulk of a ship Or in the second, a dolphin naiant proper in the third, and a lymphad also Or in the fourth.
Crest : Issuant from a naval crown Or a pierhead, thereon a lighthouse proper.
Supporters : On the dexter side a lifeboatman, and on the sinister side a coastguard holding in the exterior hand a telescope, all proper.
Motto 'Salus naufragis salus aegris'

The white horse represents Kent and the lion joined to a ship's hull is from the arms of the Cinque Ports, Ramsgate being a member of Sandwich. The dolphin, ship, naval crown and lighthouse are appropriate to a seaside resort and port.

The supportes were adopted to show Ramsgate's association with the sea through the Royal Harbour since 1760.