From Heraldry of the World
Your site history : Rayleigh
Jump to navigation Jump to search 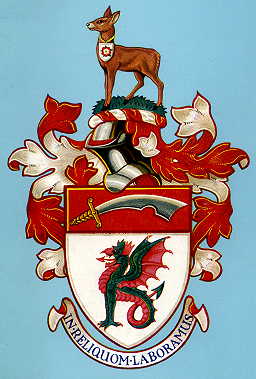 Arms : Argent a Wyvern Vert armed and langued and the jaws and underparts Gules on a Chief Gules a Seax point to the sinister proper hilt and pommel Or.
Crest : a Wreath Argent and Gules on a Mount Vert a Roe Doe statant proper pendent from the neck by a Chain Or an Escutcheon Argent charged with a Tudor Rose proper.
Motto: 'IN RELIQUIAM LABORAMUS' - We work for the future

The arms were officially granted on December 20, 1962.

At the time of the Norman Conquest, Rayleigh Mount and Castle was the seat of the Hereditary King's Standard Bearer. It is believed that the English Standard consisted of a wyvern carried aloft on a pole and it is this standard that provided the inspiration for the main charge in the arms. The county is recalled by one of the seaxes from its arms upon a red field.

The name Rayleigh, according to the English Place Name Society, means 'roe deer in a glade or clearing', to which the crest refers.
The doe stands upon a representation of the famous Rayleigh Mount, the site of a Norman fortification built by the Sheriff of Rayleigh, the son of Robert FitzWimarc a local landowner. The original castle was probably a rough timber structure, but was later replaced by the Sheriff's son Robert de Essex. The castle passed to the crown after Robert's son Henry fell from royal favour, and from then on the castle fell into decay. Rayleigh Mount is now in the care of the National Trust and commands fine views across the valley of the River Crouch. The Tudor rose was a favourite badge of Henry VIII and refers to the association between the town and that monarch, through his hunting park and lodges - now Eastwood Lodge and Rayleigh Lodge.

The first three syllables of the motto form a pun (In Rayleigh).

Literature : Information and image from Scott-Giles, 1953 and <a href="http://www.civicheraldry.co.uk">here]].