From Heraldry of the World
Your site history : Raymond James Vonesh
Jump to navigation Jump to search

Auxiliary Bishop of Joliet in Illinois, 1968-1991 Titular Bishop of Vanariona 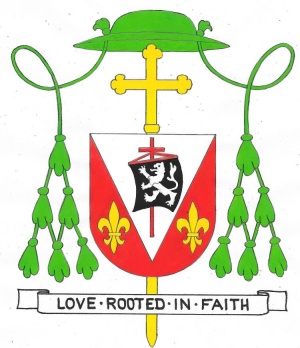 Gules on a pile argent between two fleurs-de-lis or, a staff crossed at the top of the field bearing a full sail charged with a lion rampant of the second. Motto: Love Rooted in Faith.

The pile forms the letter V, the initial of Vonesh.

The pile is charged with a black sail on a staff to honor Saint Raymond of Penyafort, the baptismal patron saint of the bishop. The black and white are the colours of the Dominican Order. The image is based on the following legend:
Raymond of Penyafort served as the confessor for King James I of Aragon. While on the island of Majorca to initiate a campaign to help convert the Moors living there, the king brought his mistress with him. Raymond disapproved of this and asked him repeatedly to dismiss his concubine. This the king refused to do. Finally, the saint told the king that he could remain with him no longer and made plans to leave for Barcelona. But the king forbade Raymond to leave the island, and threatened punishment to any ship captain who dared to take him. Raymond then went down to the seashore, took off his cappa (the long black cloak the Dominicans wear over the white tunic and scapular), and spread one end of it on the water while rigging the other end to his walking staff. Having thus formed a miniature mast, Raymond pushed away from the shore and miraculously sailed away on his cloak. Skirting around the very boats that had forbidden him passage, the saint was seen by scores of sailors who shouted in astonishment and urged him on. Raymond sailed the 300 km to Barcelona in the space of six hours, where his landing was witnessed by a crowd of amazed spectators.

The red and gold are taken from the arms of Aragon, and thus also refer to the legend.

The lion on the sail is taken from the arms of the Brennan family of the mother of the bishop.

The two fleur-de-lys are taken from the arms of the Archdiocese of Chicago, where the bishop served as a priest before.

The motto commemorates that the bishop was appointed in the Year of the Faith proclaimed by Pope Paul VI.

The achievement is completed with the heraldic insignia of a prelate of the rank of bishop by instruction of the Holy See, of March 1969.

Literature : Information from the diocese; legend from Wikipedia