From Heraldry of the World
Your site history : Redcar with Cleveland
Jump to navigation Jump to search

REDCAR WITH CLEVELAND (until 1996 LANGBAURGH-ON-TEES) 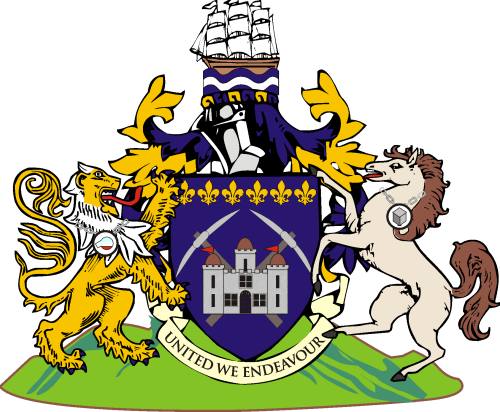 Arms : Azure in front of two Pick-Axes in saltire heads upwards a rep­resentation of the Prison Gate as appears on the Seal of the Wapentake of Langbaurgh proper in chief six Fleur-de-Lys Or.
Crest : On a Wreath of the Colours upon Water barry wavy Argent and Azure between two Rocks proper a Clipper Ship in full sail all proper pennons Azure.
Supporters : Upon a Compartment composed of a Mount Vert on the dexter side a Lion Or maned Argent gorged with a Chain dependant therefrom a Roundel Azure charged with a Glass Chemistry Flask proper showing liquid Gules on the sinister side a Cleveland Bay Horse proper gorged with a Chain dependant thereform a Roundel Azure charged with Steel Ingot proper.
Motto: 'UNITED WE ENDEAVOUR'

Langbaurgh was the name of a wapontake or old division of the North Riding of Yorkshire. The Wapontake used a seal showing a prison gate and this is the main charge in the arms. behind the gate are crossed pick axes for the historic coal mining industry. At the top of the shield are six fleurs-de-lis for the six merged councils.

The crest shows a Clipper ship, many of which once sailed from the ports of the area.

The dexter supporter is a gold English lion, made distinctive by having a silver mane. The badge hanging round his neck is a glass chemistry flask, for the chemical industry. The sinister supporter is a Cleveland Bay horse. This shows the presence of the Cleveland hills in the district. The badge about his neck shows a steel ingot for the metal industry. The compartment is made up of moorland, to suggest the North Yorkshire Moors National Park, much of which lies in the Borough.

The motto refers to Captain Cook's ship the Endeavour.