From Heraldry of the World
Your site history : Redditch
Jump to navigation Jump to search 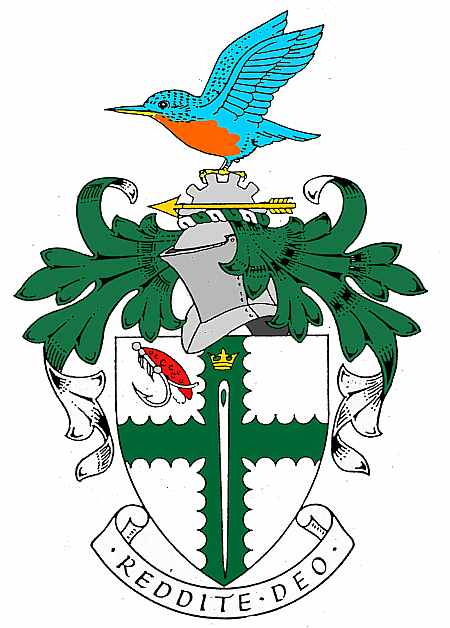 Arms : Argent on a Cross engrailed Vert a Needle point downwards of the field eyed and ensigned with an Ancient Crown Or in the first quarter a Salmon-Fly in bend proper.
Crest : On a Wreath of the Colours in front of a demi-Cogwheel thereon a Kingfisher rising proper an Arrow fesswise Or.
Motto: 'REDDITE DEO' - Render unto God or Redditch for God.

The arms were officially granted on December 15, 1943 to the Urban District Council and with a new crest granted on march 2, 1984.

The white shield suggests the white of the Monks robes. The modern hamlet of Radditch grew in the vicinity of the Cistercian Abbey of Bordeslay. On this is placed a green engrailed cross, ie. with the curved indentations and points like holly leaves; this form of cross was selected to represent St. Stephen patron saint of the ancient Abbey and the present Parish Church of St. Stephen's whose festival falls in the Christmas Season. The green of the cross also represents the surrounding forest, notably Feckenham forest, in the midst of which Redditch now stands and the wealth of green spaces within the Borough of Redditch. The crown refers to Royal associations, the Abbey having been founded in 1138 by the Empress Maud, and King John having made Feckenham one of his hunting grounds, a Royal Forest. The needle and salmon fly stand for two of the town's principle industries - the manufacture of needles and fishing tackle. The needle on the green cross links the arms with those of the Worshipful Company of Needlemakers - three silver needles each surmounted by a golden crown, on a green field. Fishing tackle is represented by the salmon fly in the first quarter of the shield.

In the original 1943 crest, the aeroplane and motor industries were symbolically represented in the by a swift, the fastest of British birds standing on a demi cogwheel against which lay a golden arrow, alluding not only to the speed and directness of modern air and road transport, but also to the River Arrow on which Redditch stands. The Swift was, in 1983, replaced by the Kingfisher which has increasingly been used to symbolise the town.

The motto - REDDITE DEO, is a play on the name of the town - from Mark XII, 17: "Render unto Caesar the things that are Caesar's, and to God the things that are God's". Reddite quae sunt Caesaris Caesari; et quae Dei sunt Dec)". This may be translated as "Render to God" or as "Redditch for God".