From Heraldry of the World
Your site history : Reigate and Banstead
Jump to navigation Jump to search 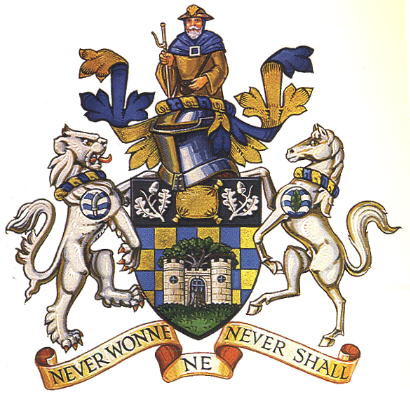 Arms : Checky Azure and Or on a Mount in base and in front of an Oak Tree a Port with Portcullis raised between two Towers proper on a Chief Sable a Woolpack Or between two Sprigs of Oak fructed Argent.
Crest : On a Wreath of the Colours a demi figure representing a Pilgrim grasping his Staff with his dexter hand and habited in traditional Costume with Scrip proper a Cloak Azure.
Supporters : On the dexter side a Lion and on the sinister side a Horse Argent each gorged with a Wreath Or and Azure and charged on the shoulders with a Fountain that on the dexter charged with a Tanner's Knife and that on the sinister with a Sallow Leaf proper.
Motto: 'NEVER WONNE NE NEVER SHALL'

The chief is also taken from the Reigate arms, but charged with the devise of the arms of Banstead, the woolpack. The woolpack refers to the former importance of sheep-rearing and the wool industry in the city. The two oak branches refer to the parishes of Horley and Salfords and Sidlow.

The mantling is again derived from the de Warenne arms, the crest is derived from one of the supporters of the Reigate arms, a pilgim.

The supporters are derived from the arms of the Earls of Surrey. The lion was also the crest of the Reigate arms, and referred to the Lords Howard of Effingham, later Lords of Reigate. The lion also was used by the Mowbray family, Lords of Banstead in the 12th century. The horse is also a symbol for the horse-racing tradition in Banstead in the 17th century. To distinguish the supporters from the Surrey supporters, they each wear a wreath in the colours of the mantling. The two supporters each wear a fountain, symbolising the River Mole. The tanner's knife on the right supporter is the symbol for St. Bartholomew, patron saint of Horley. The sallow-leaf on the left supporter is a canting symbol for Salfords (derived from Sallow ford).

The motto is that used by the former Reigate BC.

Literature : Leaflet published by and send to me by the Reigate and Banstead council