From Heraldry of the World
Your site history : Rhondda Cynon Taff
Jump to navigation Jump to search 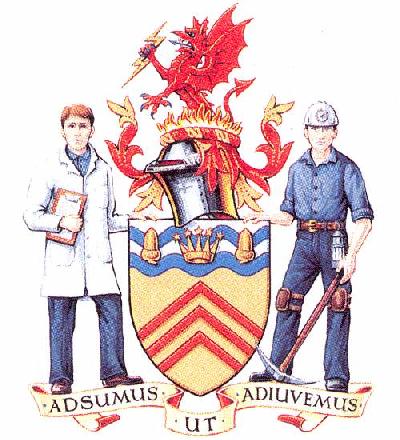 Arms: Or three Chevronels Gules on a Chief wavy barry wavy of fore Argent and Azure a Celestial Crown between two Acorns Or.
Crest: On a Wreath of the Colours issuant from Flames proper a demi Dragon Gules holding in the dexter claw a Bolt of Lightning Or.
Supporters: Dexter a Laboratory Technician habited and holding in the exterior hand a Clipboard all proper sinister a Coal Miner habited and supporting in the exterior hand a Mandrel all proper.
Motto: 'ADSUMUS UT ADIUVEMUS'.

The Crest is the Welsh Symbol of a dragon, here depicted as a demi dragon in allusion to the Crests of the constituent bodies making up the new authority. It emerges from flames in token of the regeneration of industry, and holds a flash of lightening as an emblem of new technology.

The dexter Supporter to the Shield is a laboratory technician, representing the new forms of industry attracted to the area. The sinister Supporter of a miner is taken from a Supporter to the Arms of the former Mid Glamorgan County Council, and stands for the traditional skills of South Wales. The design refers to the constituent parts of the new authority, and harks back to the old industries while looking forward to emerging technology.