From Heraldry of the World
Your site history : Rhuddlan
Jump to navigation Jump to search 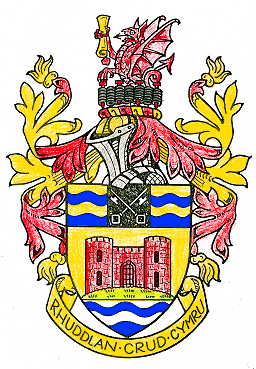 Arms : Or issuant from a Base barry wavy of four Argent and Azure a Mount Vert thereon an Edwardian Castle of two Towers Gules on a Chief barry wavy of four Or and Azure a Pale Sable thereon two Keys in saltire wards upward and outward Argent.
Crest : On a Wreath Or and Gules in front of a demi Dragon Gules holding aloft in the dexter forefoot a Roll of Parchment proper pendant therefrom a Wax Seal Gules a Fish-Weir Sable staked Gules.
Motto: 'RHUDDLAN CRUD CYMRU' - Rhuddlan cradle of Wales

The Borough's name is denoted by the stylized castle and waves representing Rhuddlan Castle on the banks of the River Clwyd. The waves are from the arms of the Rhyl UDC and the Prestatyn UDC and the keys refer to St. Asaph.

The Welsh dragon, is common to the crests of Rhyl and Prestatyn and Clwyd County Council. The unique fish-weir is from Rhyl's shield and the sealed parchment recalls the Statute of Rhuddlan issued by Edward I in 1284, which gave Wales a constitution, an historic fact recalled in the motto.