From Heraldry of the World
Your site history : Rhyl
Jump to navigation Jump to search 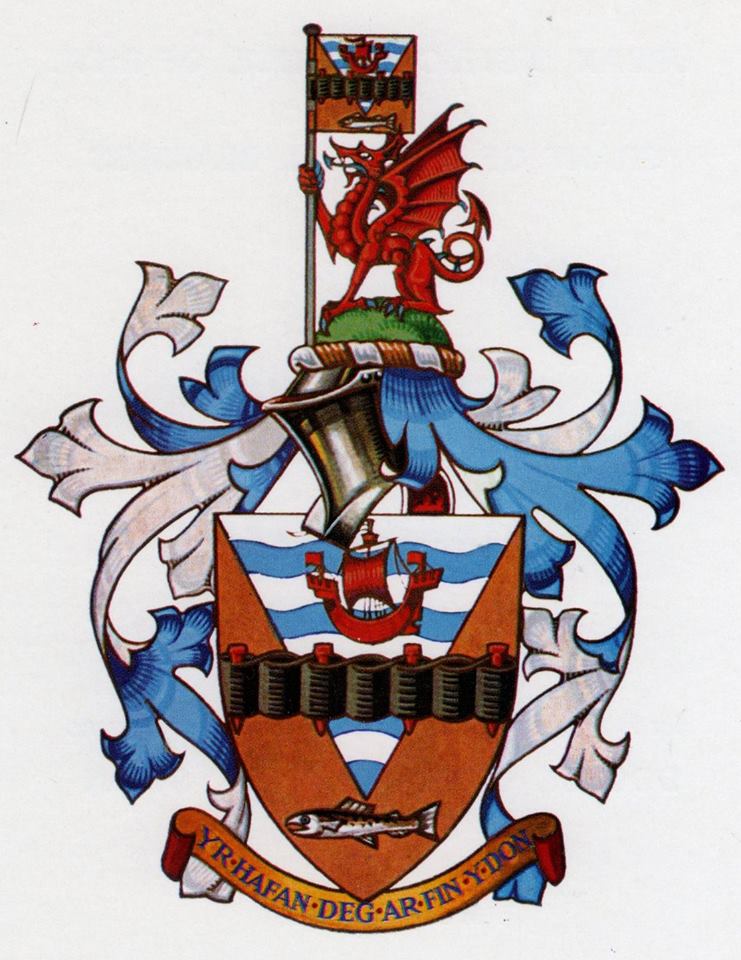 Arms : Tenny a Pile barruly wavy Argent and Azure over all a Fish-Weir Sable staked Gules in fess between a Lymphad sail set pennon and flags flying Gules and in base a Salmon naiant proper.
Crest : On a Wreath of the Colours on a Mount Vert a Dragon sejant Gules supporting a Staff proper flying therefrom a Banner of the Arms.
Motto: 'YR HAFAN DÊG AR FIN Y DÔN' - The fair haven at the edge of the waves

The basic colour of the shield is known as Tenny, derived from the French word Tenné, meaning a tawny colour, and is a direct reference to one of the possible meanings of the name Rhyl, namely a sandbank, and also to the beaches for which the resort is justly famous. The colour is a very rarely used heraldic tincture and the arms have the unique distinction of being the first civic arms in the British Isles to be granted with a Tenny field.

The blue and white pile symbolises the sea and port at Rhyl giving access to the River Clwyd. The word "Clwyd" includes amongst its meanings a moveable hurdle or wattle and the River Clwyd is represented by the wattle extending across the shield. The heraldic ship and the salmon in the shield represent the sailing which was popular at the resort and both the fishing industry and the fishing sport of the resort. The colour red has been used in design as a reference to the Principality of Wales.

Another probable meaning of the word "Rhyl" is "hill" or "hillock" and for this reason a green mound has been incorporated above the wreath and on top of which sits the Red Dragon of Wales holding a banner repeating the arms.