From Heraldry of the World
Your site history : Richmond (Yorkshire)
Jump to navigation Jump to search 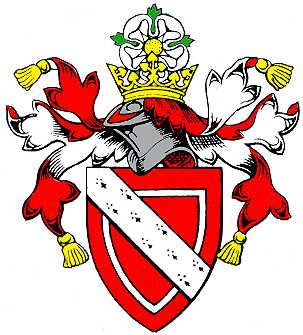 Arms : Gules an Orle Argent over all a Bend Ermine.
Crest : Out of an Ancient Crown Or a Rose Argent barbed and seeded proper.

The arms were recorded on 21st August 1665, but without colours. Confirmed with tinctures and crest granted 4th August 1959, to the Borough of Richmond. Transferred to the Town Council by Order made 16th April 1975.

The orle is possibly derived from the arms of Baliol of Barnard Castle. The ermine is from the arms of the Counts and Dukes of Brittany, who in the twelfth century held the Honour of Richmond.

The crest is derived from that previously used unofficially of a crowned red rose, this seems to have been derived from an embellishment on the seal on which the above arms were placed. The rose is now white for Yorkshire.