From Heraldry of the World
Your site history : Richmond RDC
Jump to navigation Jump to search 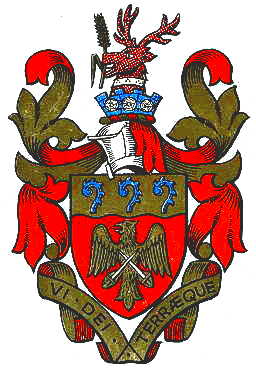 Arms : Gules an Eagle displayed wings inverted Or grasping in the claws two Swords in saltire proper hilted and pommelled Gold on a Chief wavy of the last three Abbots' Crozier Heads Azure.
Crest : On a Wreath of the Colours out of a Mural Crown Azure charged with three Roses Argent barbed and seeded proper a Stag's Head holding in the mouth an Ear of Wheat stalked leaved and slipped also proper and gorged with a Collar Ermine.
Motto: 'VI DEI TERRAEQUE'

The arms were officially granted on December 20, 1983