From Heraldry of the World
Your site history : Richmond upon Thames
Jump to navigation Jump to search 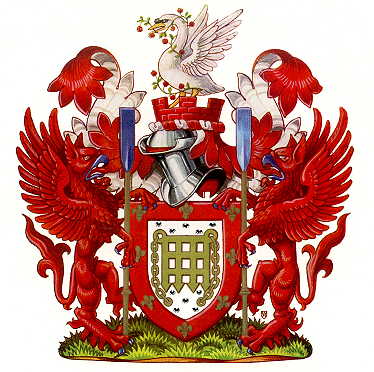 Arms : Ermine a Portcullis chained Or a Bordure Gules charged with eight Fleurs-de-Lys Or.
Crest : On a Wreath Argent and Gules out of a Mural Crown Gules a Swan rousant in the beak a Branch of climbing Red Roses leaved and entwined about the neck proper.
Supporters : On either side a Griffin Gules armed and beaked Azure each supporting an Oar proper the blade of the dexter Dark Blue and that of the sinister Light Blue.

The arms were officially granted on March 7, 1966.

The theme which runs through the design of the achievement of arms of the London Borough of Richmond upon Thames is the ancient and intimate royal connections enjoyed by the borough. The arms are portrayed in the royal colours of ermine, red and gold. As the very name Richmond is derived from King Henry VII's earldom of Richmond in Yorkshire, the principal charge in the arms is the gold portcullis. This appears to have been King Henry's favourite badge and his chapel in Westminster Abbey is decorated with crowned portcullises and roses. The border of royal red is emblazoned with another royal badge, the fleur-de-lis.

Richmond is commemorated by the portcullis in the arms; Twickenham is reflected in the crest of a swan but, instead of swimming on water as formerly, the swan now stands within the mural crown, the time honoured civic symbol and is differenced from other swans crests by the branch of red roses (another royal allusion) which it holds in its beak. The swan symbolises the river Thames whose amenities were enjoyed by all the former boroughs.

The supporters of the Borough of Barnes were two griffins, alluding to the Spencers, Lords of the Manor of Mortlake, and these, being also noble creatures symbolic of courage, strength and swiftness have been retained. The dark and light blades commemorate the fact that the University Boat Race ends at Mortlake.