From Heraldry of the World
Your site history : Richmondshire
Jump to navigation Jump to search 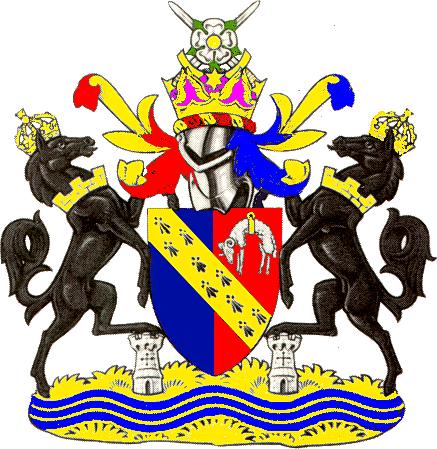 Arms : Per pale Azure and Gules a Bend Erminois in sinister chief a Fleece Or.
Crest : On a Wreath Or and Azure within an Astral Crown Or a Mount of Ling proper thereon in front of two Swords in saltire points uppermost proper pomels and hilts Or a Rose Argent barbed and seeded proper; Mantled parted Gules and Azure doubled Or.
Supporters : On either side a Horse Sable gorged with Mural Crown and crowned with a representation of a Royal Crown of King Henry VII Or resting the interior hind leg on a Tower Argent and standing on a Compartment consisting of a Grassy Mount Or charged with three Barrulets wavy Azure.

The arms were officially granted on December 20, 1983

Richmondshire council was granted entirely new arms that refer to the entire new district, rather than adopting charges from the merged councils. The blue side of the shield and gold bend recall the arms of the Scrope family, principal landowners of the area. The red half of the shield and ermine spots recall the arms of the former Borough of Richmond. Blue and red were also the colours of the Plantagenet Earls and Dukes of Richmond. Ermine spots also appear in the arms of the Dukes of Brittany, who once held the Honour of Richmond. The fleece stands for agriculture, and in particular represents a swaledale ram, the breed common to Richmond and the surrounding dale.

The crest has a mound of heather, for the Yorkshire Dales National Park. The Royal air force's presence in the area is shown by the astral crown. The crossed swords are the army garrison at Catterick. The crest is completed by a white Yorkshire rose.

The area's horse racing are depicted by the black horses supporting the arms. The horses are gorged with the crown of Henry VII, last Tudor Earl of Richmond. The crown also suggests other connections with royalty including the Saxon Kings, William I and Charles II. The horses rest their hind feet on a silver tower, for the many castles of the district.

The compartment is a gold mount, a Rich Mound, for the town's name. The blue waves are the rivers Swale, Ure and Bain.