From Heraldry of the World
Your site history : Rick Edward Kasparek
Jump to navigation Jump to search 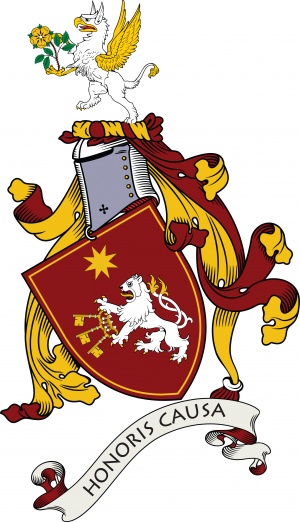 Arms: Sanguine, a Lion rampant, double queued Argent, armed and tufted Or holding in its paws by the bows three keys fesswise bows interlaced wards to dexter facing downwards Or and in chief a mullet of eight points Or all within a tressure Or.

Crest: A griffin segreant, Argent armed, winged and tufted Or supporting in its talons an heraldic rose Or slipped and leaved proper.

Motto: Honoris Causa (for the sake of honor)

Badge: A Griffin segreant double queued Sanguine; armed, langued, beaked, nimbed (or haloed) and the leonine parts Or, grasping a Mullet of 8 points Or.

Arms: The two-tailed (double queued) lion is an allusion to Bruncvik's lion (queue forché)with a split tail, first used in 13th century Moravia. It represents Rick Edward Kasparek's Czech ancestry. The three keys allude to the three daughters of Rick Kasparek. The 8 point star is called the Sternberk star (from the coat of arms of the Kasparek's ancestral town of Zlin). The lion standing beneath the star is an allusion to the legend of Kaspar who was one of the three magi who visited Christ in Bethlehem.

Crest: The griffin alludes to the Fagan side of the family and is holding an heraldic rose (a griffin is used in the crest of a well-known Fagan's arms).

Badge: The haloed griffin is a symbol of my faith, and alludes to strength and vigilance. The 8 pointed star is from the ancestral town of Zlin, and also alludes to heaven, and the Quest for the unreachable star. The double tail alludes to the split-tailed Czech lion of my Arms.

The blazon and/or emblazonment has been certified by the armiger to be his/her original (or inherited) lawful property.