From Heraldry of the World
Your site history : Rickmansworth
Jump to navigation Jump to search 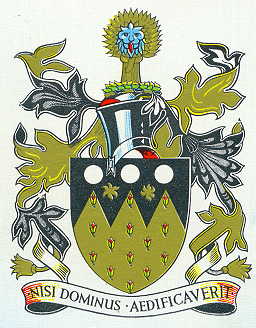 Arms : Per fesse dancetty Sable and Or semée of Flowers gentil proper in chief three Plates above two Estoiles of the second.
Crest : On a Wreath of the Colours issuant from a Wreath of Watercress proper a Garb Or charged with a Lion's Face Azure.
Motto 'NISI DOMINUS AEDIFICAVERIT' - Unless the Lord build.

The dacetty division of the shield is from the arms of the Fotherleys, Lords of the Manor of Rickmansworth in the 17th century. The three white roundels are from the arms of William Penn, the Quaker founder of Pennsylvania, whose house was used as offices by the Council. The two stars are from the arms of Sir Thomas White, Lord Mayor of London in 1553 and a leading figure in the foundation of the Merchant Taylors' School, who was born at West Hyde. The flowers gentil refer to Dr. John Caius, the third founder of Gonville and Ciaus College, Cambridge, who granted the Manor of Croxley Green to the College, whose arms also include flowers gentil.

The crest refers to the Manor of the Moor, the wheatsheaf coming from the arms of the Lords Ebury and the blue lion's face from those of Cardinal Wolsey. The watercress refers the district's distinctive agricultural industry.

The motto is derived from the first verse of Psalm CXXVII in the Vulgate and is appropriate to a town mainly residential in character.