From Heraldry of the World
Your site history : Rietberg
Jump to navigation Jump to search 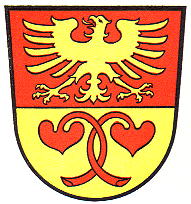 The arms are identical to the arms of the former Amt Rietberg, see there.

Previously the city used the arms below. These arms are based on the oldest known seals of the city, known since 1278. The eagle is derived from the arms of the Counts of Rietberg, as the city was the capital of the county.