From Heraldry of the World
Your site history : Rochdale
Jump to navigation Jump to search 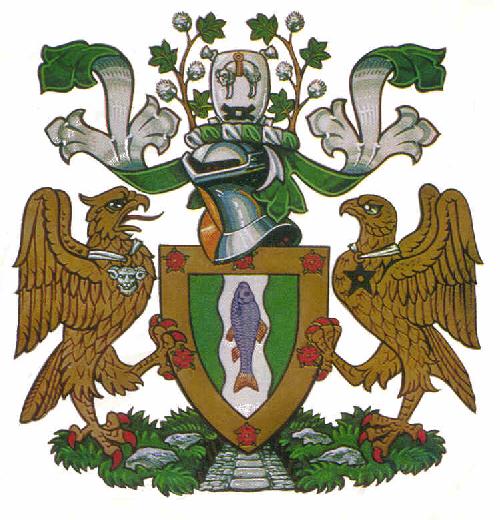 Arms : Vert on a Pale wavy Argent a Roach haurient proper all within a Bordure Or charged with six Roses Gules barbed and seeded proper.
Crest : On a Wreath of the Colours between two Sprigs of the Cotton Plant a Woolpack charged with a Fleece proper banded Or above a Millrind fesswise Sable.
Supporters : On the dexter side an eagle Or gorged with a Ribband Argent pendant therefrom by a Ring or a Ram's Head also Argent and on the sinister side a Falcon Or gorged with a like Ribband pendent therefrom by a Ring Or a pierced Mulley Sable.

The shield represents a new Rochdale authority consisting of six Lancashire areas: the rest represents local industries through emblems derived from the Rochdale arms; the supporters represent other areas; and the badge is a continuation of the theme of the arms.

The shield is green with a white wave running down the middle on which is a canting roach, also representing the Roch Valley. The border shows six red roses, suggesting the boundary of an area drawn from six Lancashire authorities, the rose being a symbol of Lancashire.

The crest is composed of the emblems representing the characteristic local industries in the Rochdale district - woolpack, fleece, millrind, and cotton plants. These stand for the textile and engineering industries which have long been important to the whole area. The fleece is also the emblem of Milnrow and the cotton was seen in Middleton's arms.

The supporter on the left is the golden eagle of Rome, commemorating the association of Littleborough with one of the famous relics of the Roman occupation of this region - the road over Blackstone Edge. This is shown laid on a base of Pennine moorland on which the whole coat-of-arms stands and takes the place of a motto on a scroll.

For a necessary distinguishing emblem, the eagle's neck is encircled with a white ribbon from which hangs a ram's head and neck, the emblem of Wardle.To match the eagle, on the other side is the falcon from the crest of Heywood, adapted from the crest of the Heywood family. It also has a ribbon from which hangs the black pierced mullet of spurrowel of the Asshetons, from the arms of Middleton. Incidentally, the crest-wreath and mantling are supposed to be of silk, and this is an illusion to another local industry portrayed in the arms of Middleton. 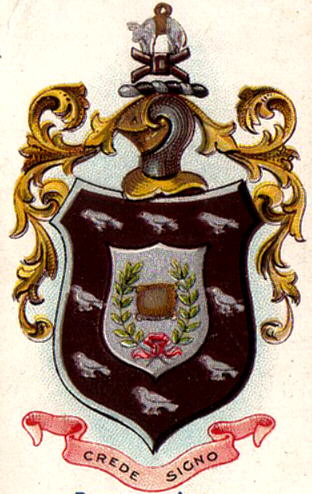 Arms : Argent a Woolpack encircled by two Branches of the Cotton Tree flowered and conjoined proper a Bordure Sable charged with eight Martlets of the field.
Crest : On a Wreath of the Colours a Millrind Sable and above a Fleece Argent banded Or.
Motto: 'CREDE SIGNO' - Believe in the sign

The arms were officially granted on February 20, 1857.

The fleece, woolpack, cotton and millrind stand for the local wool, cotton and iron industries. The martlets are from the arms of the Rashdale and Derden families. The Deardens came into possession of the Rochdale Manor in 1823. The motto Crede Signo, is based on that of Lord Byron of Rochdale.