From Heraldry of the World
Your site history : Rochester upon Medway
Jump to navigation Jump to search 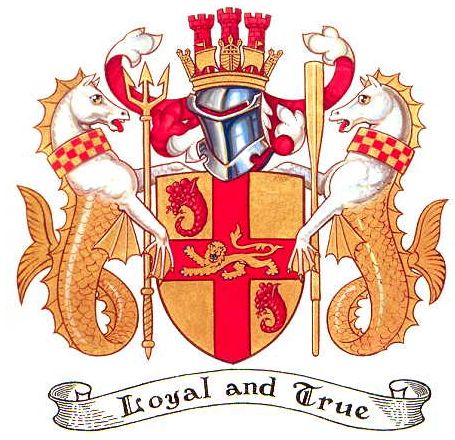 Arms : Or on a Cross between in the first and fourth quarters a Cornucopia Gules a Lion passant guardant of the first.
Crest : Out of a Naval Crown Or three Towers Gules; Mantled Gules doubled Argent.
Supporters : On either side a Sea Horse Argent tails and fins Or each gorged with a Collar chequy of the last and Gules the dexter supporting a Trident and the sinister an Oar both Gold.
Motto: 'LOYAL AND TRUE'

The arms consist of the red cross on gold, taken from the old arms of Rochester, together with two cornucopias, symbols of plenty, from the arms of Strood. On the cross is the gold lion of England, used by Rochester to denote that it was once a royal borough, but now symbolising the area's many royal connections.

The three castles in the crest represent the three districts which have merged to make one, and the naval crown, refers to the nautical character of Medway; also it is a reminder of the crest of Chatham, which also emerged from naval crown.

The supporters are heraldic sea-horses and denote the white horse of Kent, being harnessed to the service of the sea. Their collars are from the chequered fess in the arms of Pitt, Lord Chatham, which also formed part of the arms of Chatham. To difference the sea-horses from similar supporters, one supports a trident, the other an oar. The head of the trident also features in the badge, where it is enclosed by three mural crowns, representing the three old authorities of Chatham, Rochester and Strood.