From Heraldry of the World
Your site history : Rochford RDC
Jump to navigation Jump to search 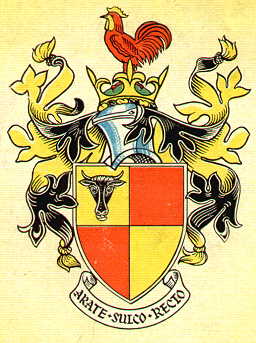 Arms : Quarterly Or and Gules in the first quarter a Bull's Head caboshed Sable.
Crest : On a Wreath Or and Sable standing on a Mount Vert enfiled by an Ancient Crown Or a Cock Gules combed and wattled Gules.
Motto: 'ARATE SULCO RECTE' - Plough a straight furrow

The arms were officially granted on September 3, 1954.

Rochford Hall, which has been in existence since the twelfth century, and its surrounding parkland came into the possession of the de Rochford family at this time. In 1247 Sir Guy de Rochford started holding a weekly market on a Tuesday and an annual three-day fair, this was probably the first market and fair to be held in Rochford. This market flourished until 1959, when it fell into disuse. It is from the arms of the de Rochford family, who took their name from the town, that the gold and red quarters of the arms are taken. The Manor of Rochford passed through the hands of various nobleman until it was acquired by Sir William Bullen (or Boleyn) in 1515.
His son was Sir Thomas Boleyn was created Earl of Rochford and his daughter was the ill-fated Anne Boleyn. Henry VIII often hunted in the Forest of Rayleigh, which adjoined Rochford Park and it is known that he often visited Rochford Hall, as Sir Thomas Boleyn was very much in the King's favour. Anne spent much of her time at Rochford Hall, one of the three ancestral seats of the Boleyn family, and was probably here that she first met Henry. At the age of 22 she was appointed a maid of honour to Catherine of Aragon and eventually married Henry secretly in January 1533, some months before Henry's divorce from Catherine had been officially announced and it was not until later in the year that the marriage was finally made public.

Eventually the Manor of Rochford passed into the possession of Robert Riche, second Earl of Warwick. According to legend, one night in 1620 after a long absence abroad, the Earl was awakened by a cock crowing and overheard his tenants whispering a plot to murder him. As a penance he commanded all his tenants to gather annually at King's Hill in East Street on the Wednesday after Michaelmas and do homage for their lands in a whisper. This became known as the Lawless or Whispering Court and survived for 350 years until the end of the nineteenth century when preceding the Court a supper was provided at the King's Head. The Court and legend are recalled by the mound surrounded by a crown, for King's Hill, and the cock in the crest.

The motto ('ARATE SULCO RECTE'-Plough a straight furrow) can be interpreted both agriculturally and ethically.

Literature : Information and image from Scott-Giles, 1953 and "http://www.civicheraldry.co.uk