From Heraldry of the World
Your site history : Romford
Jump to navigation Jump to search 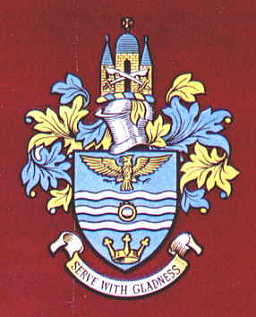 Arms : Azure on a Fesse wavy barry wavy of four Argent and Azure between in chief an Eagle displayed and in base a Saxon Crown Or a Ring also Gold gemmed proper.
Crest : On a Wreath Or and Azure in front of a Castled Gateway of three Towers Or masoned Sable the centre tower domed Azure ensigned with a Cross Gules and the outer towers each with a Steeple Azure two Seaxes points upwards in saltire proper hilts and pomels Or.
Motto: 'SERVE WITH GLADNESS'

The market town of Romford developed in the middle ages where the Roman Road from London to Colchester forded the river now known as the Rom, to which the blue and white waves refer. The Roman settlement of Durolitum, represented by the gold Roman eagle, is though to have been located within the borough, however its exact location is unknown and some authorities place it further west in the Chigwell area.
The Roman eagle and the ford (blue and white waves) in conjunction form a canting of punning reference to the name Romford (Roman ford), the derivation however is derived from the Old English Rum-ford 'Roomy or wide ford' and the modern name of the Rom is a back-formation. The gold ring recalls that, which according to a legend dating back to the twelfth century, Edward the Confessor gave as alms to an old beggar, while attending the consecration of a church dedicated to St. John. However it is not until later that the name Havering is connected with the legend, in a version appearing in a chronicle dated circa 1436. The beggar was St. John in disguise, and he latter returned the ring the King, with the message he should 'dispose of his goods, for within six months he shall be in the joy of heaven with me, when he shall have his reward for his chastity and good living'. The legend led to the erroneous belief that the name Havering was derived from the words 'have ring' uttered by the King, the legend gained so much credence that it is depicted in sculptures in Westminster Abbey and Ludlow Church. There is no contemporary record connecting the Confessor with Havering, but the legend strengthens the probability that he was the predecessor of Earl (later King) Harold who held the Manor of Havering. The Confessor's and the other Saxon king's links with area are recalled by the Saxon crown.

A Royal House or Palace existed at Havering-atte-Bower from the eleventh to the seventeenth centuries, and it is the gatehouse of this palace which is depicted in the crest. The design is derived from the seal of the Liberty of Havering, which was created by charter of Edward IV in 1465 and finally lost its privileges in 1892. The designed was also used on the seal of the Romford Urban District Council and was used as a trade mark by Ind Coope and Co, brewers of Romford. The seaxes recall the county of Essex, to which the town belonged when the arms were granted.