From Heraldry of the World
Your site history : Roxburgh
Jump to navigation Jump to search 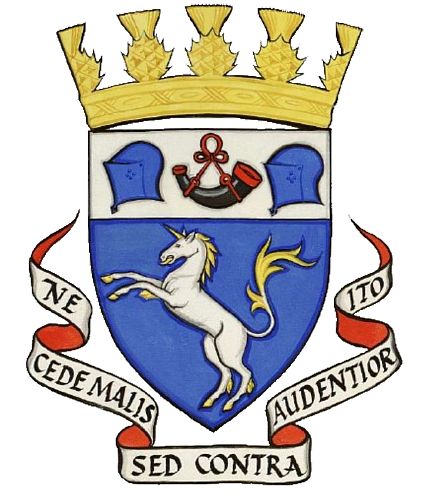 Azure, a unicorn saliant Argent, horned, maned and un­ guled Or, the tail tufted of the Last; on a chief of the Second a hunting horn Sable, stringed and viroled Gules, between two esquires' helmets of the field.

Above the Shield is placed a coronet appropriate to a statutory District, videlicet:- a circlet richly chased, from which are issuant eight thistle-heads (three and two halves visible) Or; and in an Escrol under the Shield this Motto "Ne Cede Malis Sed Contra Audentior Ito".

The arms are those of the former county of Roxburghshire with a different crown and without the crest.