From Heraldry of the World
Your site history : Royal Australian College of General Practitioners
Jump to navigation Jump to search 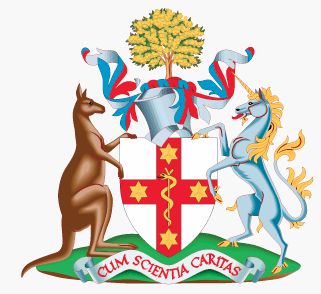 The red cross, as the universal badge of medical services, and the Rod of Aesculapius are self­ explanatory; the four stars, signifying the Southern Cross, are of six points to represent the six Faculties of the College.

The crest shows the living golden wattle tree in full bloom, and the wreath and mantling are the colours of the College gown.

The Supporters, Australian and British (the unicorn being chosen for its 'fabled healing properties'), show the close relationship with the Royal College of General Practitioners.