From Heraldry of the World
Your site history : Royal Leamington Spa
Jump to navigation Jump to search 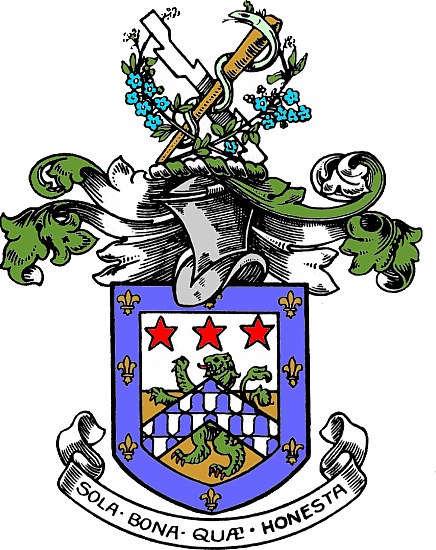 Arms : Per fesse Argent and Or a Lion rampant double queued Vert debruised by a Chevron Vair in chief three Mullets Gules all within a Bordure Azure charged with eight Fleurs-de-lis of the second.
Crest : On a Wreath of the Colours in front of a Staff raguly in bend Argent surmounted by a Staff in bend sinister Or entwined with a Serpent proper two Sprigs of Forget-me-nots in saltire also proper; Mantled Vert doubled Or.
Motto: 'SOLA BONA QUÆ HONESTA' - Only those things that are honourable are good.

The arms were officially granted on 1876.

The arms are made up of emblems for the Lords of the Manors of Leamington and Newbolds Comyn. The field is divided per fess for the two manors. The red stars on silver are for the Willes family. The gold field recalls Ambrose Dudley the "Good Earl of Warwick". The green, double-tailed lion of Dudley is placed over both parts, as superior lord of the place. The vair chevron is for Fisher of Packington. This family succeeded to the Lordship. The border is from the arms of Geoffrey de Clinton, who originally gave the manor to the monks of Kenilworth.

In the crest, the ragged staff is for the Earls of Warwick, and the caduceus for the health spas of the town. The forget-me-nots were the badge of the monks of Kenilworth.

The motto is SOLA BONA QUAE HONESTA- Those things alone are good which are honourable.