From Heraldry of the World
Your site history : Royal Tunbridge Wells
Jump to navigation Jump to search 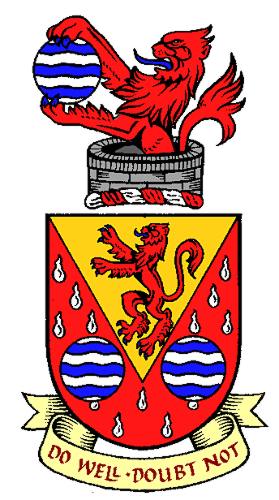 Arms : Gules, guttée d' eau, on a pile Or between two fountains in base, a lion rampant gules.
Crest : On a wreath of the colours, a well proper, issuant therefrom a demi lion gules holding between the paws a fountain.
Motto: Do well doubt not

The arms are mainly canting; the two roundels with wavy bars are heraldic fountains and together with the drops symbolise the medicinal springs after which the town is named. The lion is the Royal lion and thus another canting element. The crest combines the same elements.