From Heraldry of the World
Your site history : Royal Victorian Eye and Ear Hospital
Jump to navigation Jump to search 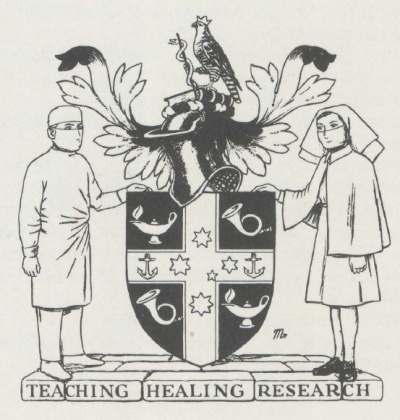 Arms : Azure, on a Cross Gules, fimbriated Argent, between in the first and fourth quarters an ancient Lamp Or enflamed proper, and in the second and third quarters a Horn Or, a representation of the constellation of the Southern Cross between two Anchors in fess Argent.
Crest : On a Wreath Argent and Gules a Falcon proper, ducally crowned Or, standing on a closed Book fessewise Sable, garnished Gold, and supporting with the dexter claw a Rod of Aesculapius Or.
Supporters : On the dexter side the figure of a Surgeon, masked and gowned, and on the sinister side the figure of a Trained Nursing Sister of the Royal Victorian Eye and Ear Hospital both proper.
Motto: 'Teaching, Healing, Research'.

The Cross, incorporating the Southern Cross, which is taken from the Arms of the State of Victoria, bears also anchors taken from the Coat of Arms of Dr Andrew Sexton Gray, founder of the Hospital, whose motto was 'Anchor Fast Anchor'.
The lamp symbolizes the Hospital's work in the prevention of blindness, bringing light and sustained vision; and the horn its work in ear, nose, and throat conditions. It is an allusion to the sound produced by the larynx, its modification by the mouth and nose, and its reception by the ear.

In the Crest the falcon symbolizes Horus, the bird-headed god of the ancient Egyptians, who after deification became the god of healing, his eye becoming the amulet of health. The crown on the falcon's head is an allusion to the granting in 1961 of the prefix 'Royal' to the Hospital by Her Majesty Queen Elizabeth 11. The book represents the teaching and research functions of the Hospital.

The Supporters, surgeon and nursing sister, are symbolic of professional skills and patient care.