From Heraldry of the World
Your site history : Royston (Hertfordshire)
Jump to navigation Jump to search 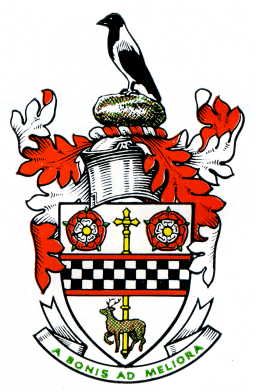 Arms : Argent a fesse Gules thereon another chequy of the first and Sable in chief two Tudor Roses barbed and seeded and in base a Stag trippant the whole surmounting an Archiepiscopal Staff all proper.
Crest : On a Wreath of the Colours perched upon a representation of the Royse Stone a Hooded Crow proper.
Motto: 'A BONIS AD MELIORA' - From good things to better.

The black and white chequered bar is from the heraldry of the Stuarts, and refers to the association James I had with the Town. The hart is a reference to the County, and perhaps also to the royal hunt.
The Archiepiscopal staff denotes the ancient Priory of Austin Canons, Sir Eustace de Merc, Lord of Newsells Manor, Barkway (which was one of the four parishes forming Royston), built on the site of the present Priory a chapel for three chaplains. Upon the same spot his nephew, Ralph of Rochester, founded a house of Austin Canons, to whom he gave the land on which the Priory of St. John the Baptist and St. Thomas the Martyr stood. The staff in the coat of arms was also the Seal of the Priory.
The two Tudor roses are included to signify the period when the Priory was dissolved during the reign of Henry VIII.

The hooded crow is a bird peculiar to the district. The bird has by a long association with Royston dating back to 1648, gained the name of the Royston Crow. The stone on which the crow is perched is the Roys Stone, a boulder which was originally at the base of the Roys Cross which stood for several centuries at the crossing of Ermine Street and the Icknield Way.