From Heraldry of the World
Your site history : Rushmoor
Jump to navigation Jump to search 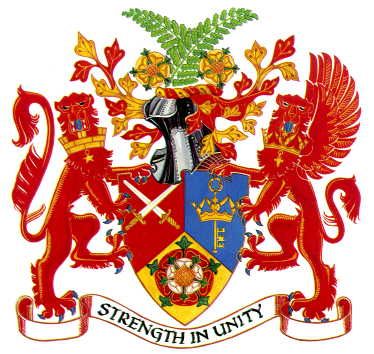 Arms : Tierced in pairle reversed Gules Azure and Or in the first two Swords in saltire points upward Argent hilts Or in the second a Key ward downward enfiled of an Astral Crown Or in the third a Rose Gules charged with another Argent both barbed and seeded proper.
Crest : On a Wreath Or and Gules two Fern Leaves in saltire proper between two Roses Or barbed and seeded proper.
Supporters : To the dexter a Lion rampant guardant Gules gorged with a Mural Coronet pendent therefrom a Mullet Or to the sinister a winged Lion rampant Gules gorged with an Astral Crown pendent therefrom a Latin Cross Or.
Motto: 'STRENGTH IN UNITY'

The arms were officially granted on 7th August 1975.

The crossed swords in the first section of Arms depict the Borough's close association with the Army, and the Key surmounted by an Astral crown in the second section signify the connection with the Royal Aircraft Establishment. The rose in the third section is the Hampshire Rose, the emblem of the County in which Rushmoor is situated.The fern leaves and roses in the crest are similar to those in the Crest of the former Urban District of Farnborough.

The lions used as Supporters are similar to those in the Coat of Arms of the former Borough of Aldershot, although the right hand lion now has wings to denote the Borough's association with aviation. The right hand lion also has an Astral Crown around its neck, with a Latin Cross hanging from it. The left hand lion has a Mural Crown with a Gold Star.

The Motto: "Strength in Unity" was selected by the Council, from many suggestions submitted, to signify the amalgamation of the two towns of Aldershot and Farnborough.