From Heraldry of the World
Your site history : Ryedale
Jump to navigation Jump to search 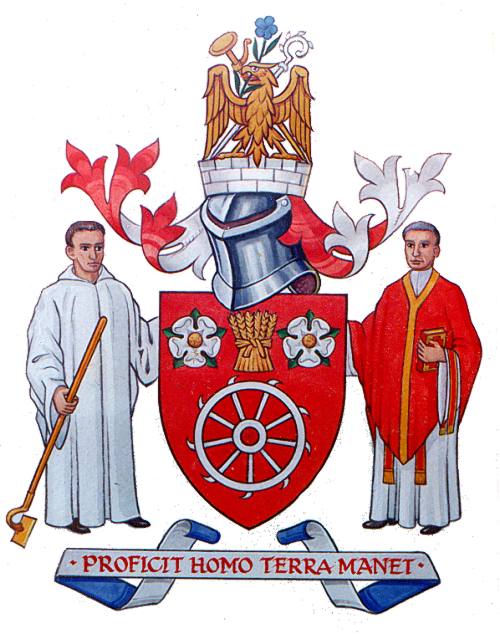 Arms : Gules a Catherine Wheel of nine spokes Argent in chief a Garb Or between two Roses Argent barbed and seeded proper.
Crest : Upon the Marions of a Mural Crown Argent masoned Sable in front of a Palmer's Staff Or and a Crozier Argent in Saltire an Eagle displayed Or holding in the beak a Twist of Flax proper; Mantled Gules doubled Argent.
Supporters : On the Dexter a Monk of the Cistercian Order habited proper holding in the exterior hand a Hoe Or and on the Sinister a Clerk in Holy Orders and a Religious in Liturgical Vestments proper holding in the exterior hand a Book Gules garnished Or.
Motto: 'PROFICIT HOMO TERRA MANET' - A man passes on to better things whilst earth remains inviolate.

The arms were officially granted on April 4, 1977.

The background of the shield is red and on this is a silver Catherine Wheel. The Catherine Wheel Is from the arms of Walter Espec principal land owner of the district in the early Middle Ages. Espec was the founder of the Abbey of Rievaulx and of the Priory of Kirkham. The heraldic Catherine Wheel usually has eight spokes but in this case there are nine spokes to signify the nine Councils enjoined in the new district.

Above the Catherine Wheel are two white Roses of York and are from the arms of the old East Riding and North Riding County Councils as the new district extends into these former County Council areas.

Between the Roses Is a golden sheaf of corn or Garb. This represents a sheaf of rye in allusion to the district name and is also indicative of the agricultural importance of the area.
The main colours of the shield - red and silver - are the principal colours in the arms of the former Councils of Malton, Pickering and Flaxton, the North Riding County Council, Rievaulx Abbey, Kirkham and Malton Priories and in the arms of more than twelve of the important families of the Ryedale district.

The crest consists firstly of a Mural Crown. This is white with masonry picked out in black lines. The crown represents the castles of Helmsley, Pickering, Sheriff Hutton, Malton, Kirkbymoorside and Slingsby and is also very appropriate for use of civic heraldry.
On the crown is a golden Roman Eagle indicative of the strong Roman influence in Ryedale. The Eagle has In Its beak a twist of flax, which is from the arms of Flaxton Rural District Council. Behind the Eagle Is a golden Palmer's Staff, this Is from the arms of Malton Priory and was a staff carried by pilgrims. Next to the staff is a silver Crozier the staff of a Bishop and in this case it is for St Chad and his brother St Cedd - founders of the Abbey of Lastingham in the 7th Century.

The supporters are, on the left a Monk of the Cistercian Order in the white habit of the Order and holding a hoe and on the right a Clerk in Holy Orders In Liturgical Vestments of red and gold and holding a red coloured book with gold clasps. The arms are based on the great religious houses of the Middle Ages and their patrons - particularly that of Rievaulx. The whole character of Ryedale with its good agricultural background and mainly pastoral life can be traced back to the influence and education of the monks. At the dissolution of the Monastries in 1536 the Abbey of Rievaulx alone owned 20 parishes and 17 other places In the Ryedale District.